You are here: Home / Archives for pain

There are several dental care myths out there, and many people believe them. This could be dangerous for your dental health — so don’t believe everything you hear!

Many dental problems are hard to notice at first and don’t cause any pain until they become more serious. When things like gum disease or a cavity starts, only a dental professional may be able to see the warning signs. However, when these problems progress, discomfort sets in. And the further along it is, the more expensive and serious the treatment will be. Preventing a problem or catching it early is much better than waiting until it’s too late. Visit your dentist regularly so he or she can catch any early warning signs!

Many people think candy and sugary foods are the only cause of tooth decay. Although sugar plays a role in tooth decay, it isn’t the only thing. Acids from bacteria in your mouth combine with saliva and cause plaque buildup on teeth. This doesn’t only happen when eating sugar; it often happens when your mouth is breaking down carbohydrates!

Dental Health Myth: “Rinse your mouth out with water after brushing.” 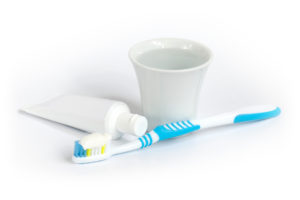 Rinsing your mouth out with water may seem like it’s leaving your mouth extra clean. But it may actually be reducing the positive effects of your tooth brushing! Toothpaste contains fluoride, which protects teeth from decay, strengthens enamel, and even reduces the amount of cavity-causing acid that bacteria produce. When you rinse your mouth out after brushing, you’re also rinsing away that valuable flouride! Spit toothpaste out when you’re done brushing, but don’t rinse.

Although some people may have more sensitive gums than others, bleeding is not normal. Bleeding gums are often the first sign of infection. If your teeth aren’t used to being flossed regularly, they may bleed a bit when you start as you get rid of plaque and your gums adjust. To heal bleeding gums, consistently brush and floss gently twice a day. But if bleeding continues, see a dental professional to check for more serious issues.